You are at a coffee shop, ready to order your favorite latte, when you notice a strange name on the menu — a breve latte. Do you dare set sail into unknown waters (or coffees)?

Caffè breve and caffè latte are members of the same family of milky coffee drinks. But just like any siblings or relatives, they are not identical. Despite their shared heritage, each espresso-based drink is fundamentally different.

Read on to explore the differences between breve vs. latte, both big and small!

What is a caffè latte?

In Italy, the traditional caffè latte is prepared for breakfast with coffee brewed in a Moka pot and poured over heated, but not steamed, milk. It’s nearly universally made at home instead of being drunk at coffee shops.

The latte you are probably familiar with consists of one or two shots of espresso prepared with a traditional espresso machine, combined with steamed milk, and topped with froth. This version is among the most popular coffee drinks worldwide.

Caffè latte has spawned numerous variants, including hot and cold latte drinks made with soy milk, flavored syrups, chocolate, and more. There is even a whole genre of latte art! 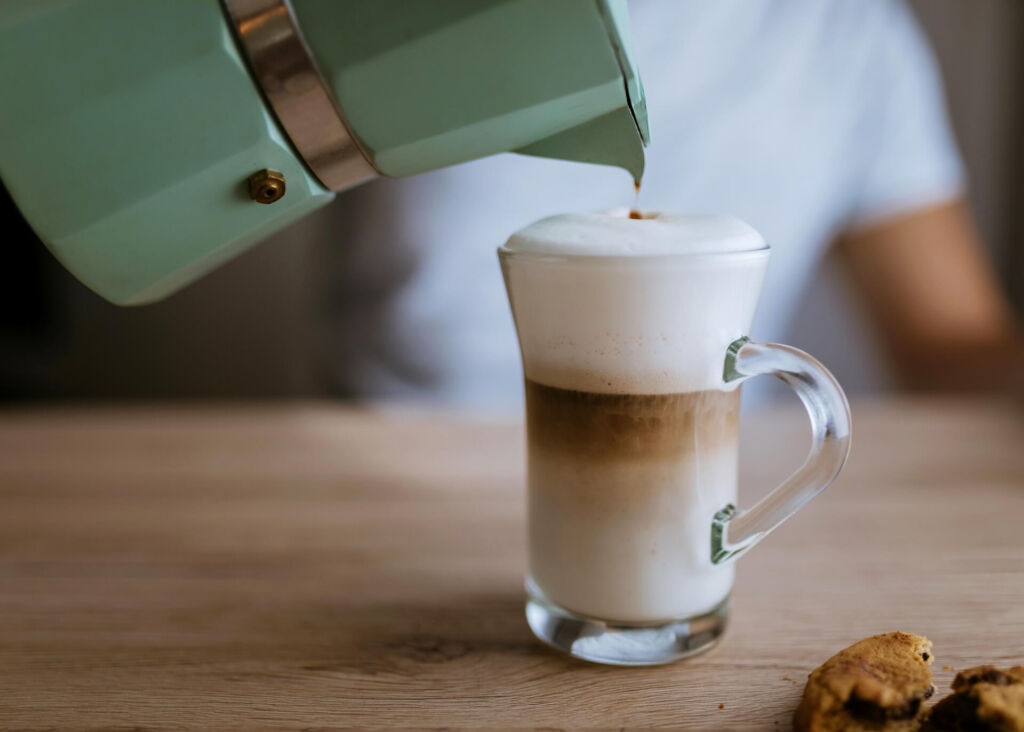 What is a caffè breve?

Caffè breve — also called breve latte, breve coffee, or just breve — is an espresso-based drink made with half-and-half. The beverage’s name comes from the Italian word for “short,” referring to the traditionally small serving size.

Breve is often considered an American version of a latte, but it also shares many similarities with the cappuccino. Coffee shops today usually treat it more like cappuccino, and baristas serve breves topped with a dusting of chocolate powder.

That said, it’s not unheard of to find breve flavored with chocolate syrup, sugar, honey, and many other add-ins used with lattes. “Breve” may also describe other coffee beverages made with half-and-half instead of frothed milk.

This isn’t technically correct use of the word, but at least you know what a “breve cappuccino” is. 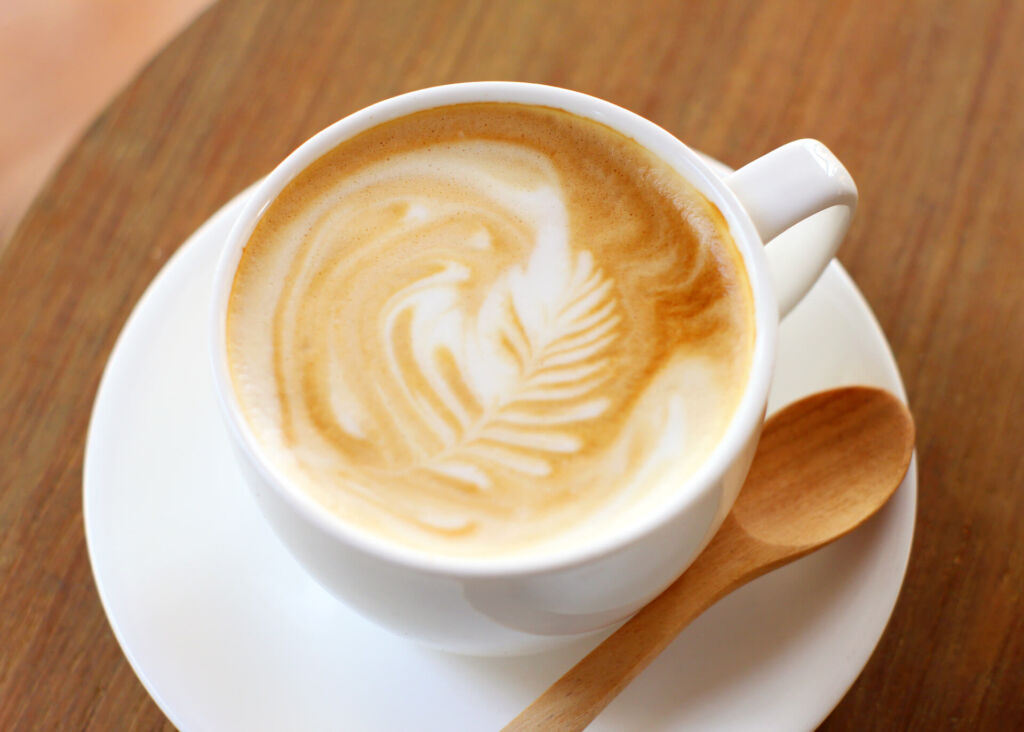 Breve vs. latte: the main differences

Latte and breve do have a familial connection. Each is an espresso-based beverage with one or two shots of espresso and dairy.

But that’s pretty much where the similarities end. Breve and latte have different flavors and textures.  So, let’s take a closer look at the differences between a breve and a latte.

Warm or cold milk and espresso is an age-old combination with various variations from cafe con leche (coffee with milk) to mocha and cappuccino. Both latte and breve stem from this background, but in practical terms, the two drinks originated in very different places.

Although baristas worldwide have added their spin, the classic caffè latte is firmly rooted in Italy. Caffè breve, on the other hand, was invented in the U.S., most likely around the 1960s and ’70s, when half-and-half appeared in shops nationwide. 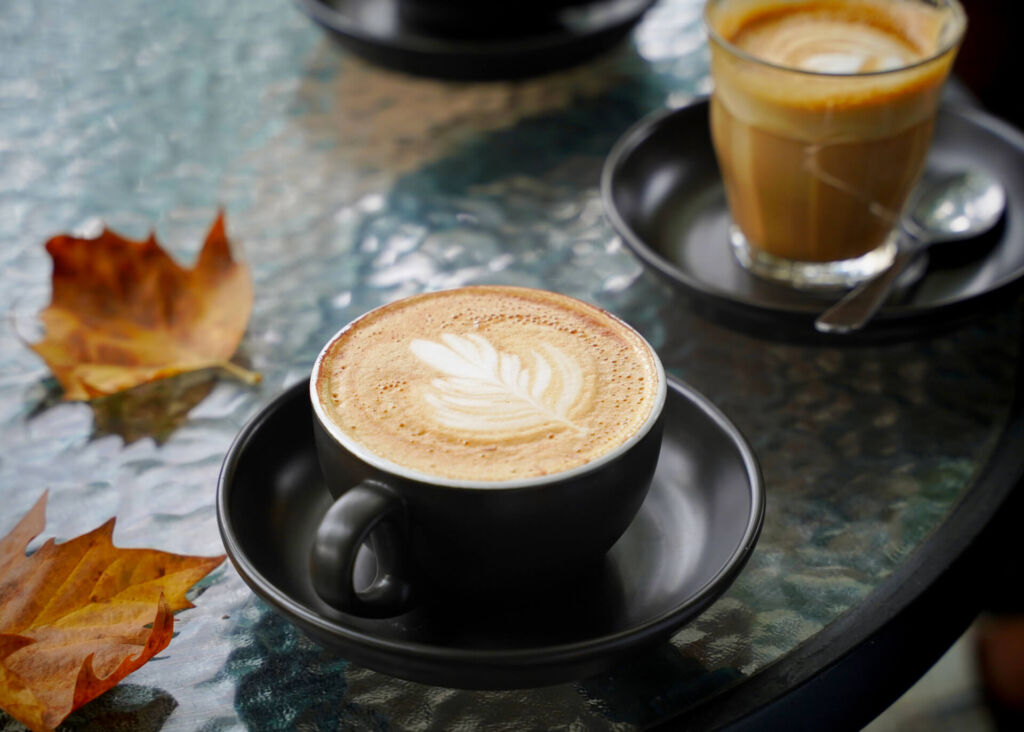 In the battle of breve vs. latte, espresso is the shared ingredient. But it’s the dairy element that separates them.

Lattes in the coffee shops are made with steamed cow’s milk, though plant-based milk, such as oat or almond, can be used too. Meanwhile, a classic Italian latte contains warm but not steamed milk.

In a cafe breve, milk is replaced with steamed half-and-half, a mixture of heavy cream and whole milk containing roughly 10-12% fat.

The recipes for latte and breve require a single or double shot of espresso, depending on how strong you want the beverage. But after that, the composition of the drinks diverges.

Measured in parts, a latte consists of 1/4 espresso and 3/4 textured milk, topped with a small amount of milk foam. 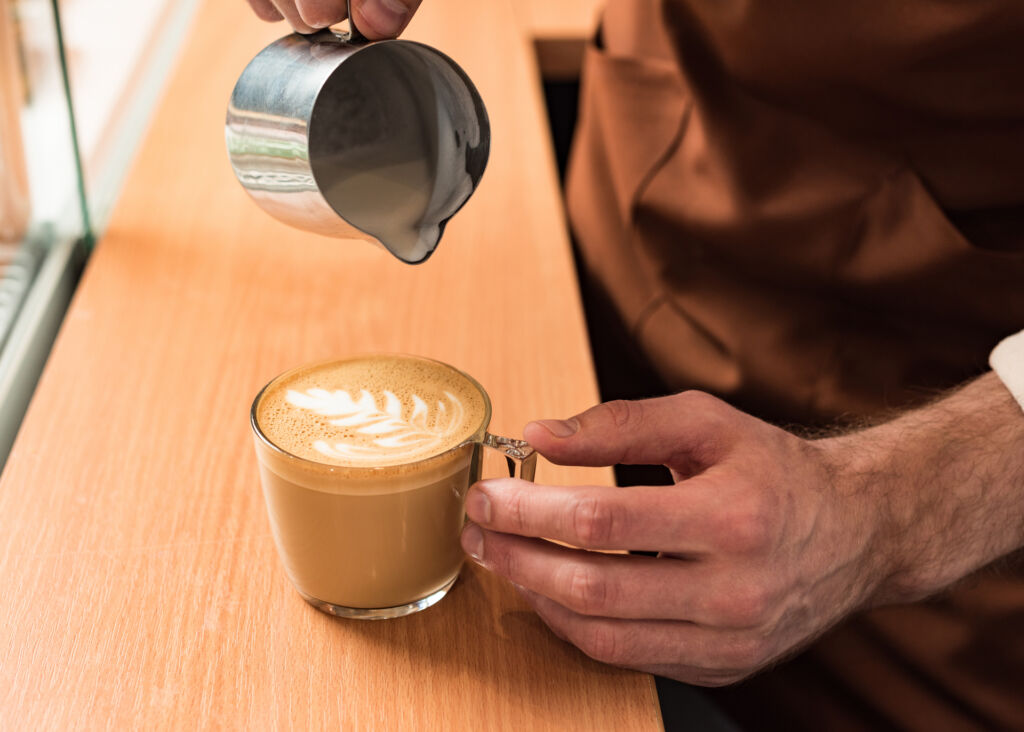 If you made breve and latte in clear glasses and lined them up side by side, you could tell them apart immediately. The secret lies in the thickness of the milk foam head.

A latte has only a small amount of milk foam floating on top of it. On the other hand, a breve has a substantially thicker head of foam than a latte, making up about a quarter of the entire drink.

Apart from the foam, breve coffee and a latte look rather similar. Both have a similar tan or light brown color resulting from the dairy and coffee mixture.

A breve may be slightly lighter in color, but the difference is usually so small that only the most sharp-eyed coffee drinkers will notice it. 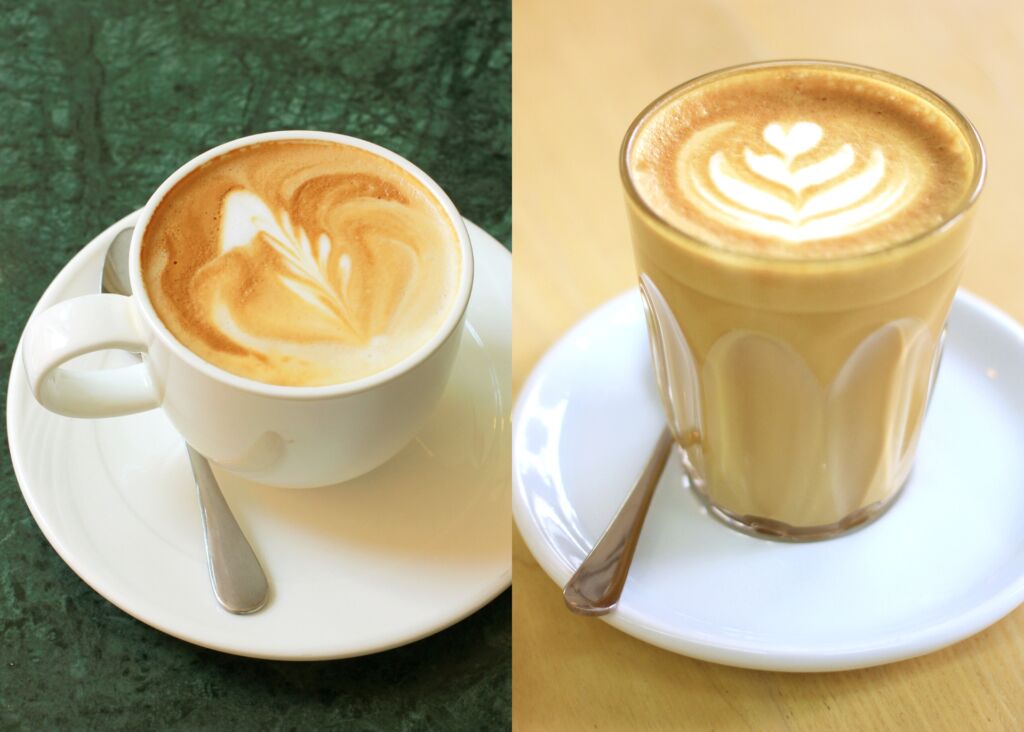 A breve cafe and a latte are also quite different when it comes to taste. Although both have only two ingredients, it’s surprising how much difference half-and-half can make in terms of flavor.

A latte tastes lighter than a breve since you steam milk instead of half-and-half. It’s slightly sweet and has a less pronounced coffee flavor.

Meanwhile, a breve is a richer and creamier drink due to the use of half-and-half. It has a stronger coffee flavor compared to a latte. A breve also has a sweetness to it with some slight hints of caramel due to the sugars in steamed half-and-half being affected by the heat.

Latte and breve are typically served hot. A latte generally comes in a cup ranging between 11 and 15 ounces.

A breve is typically served in a smaller cup, ranging from 6 to 8 ounces.

Both latte and breve are prepared in the standard serving sizes. You may get a latte-sized drink if you order a breve at a coffee shop. This is especially true if a coffee shop like Starbucks uses the word “breve” to describe swapping whole milk for half-and-half. 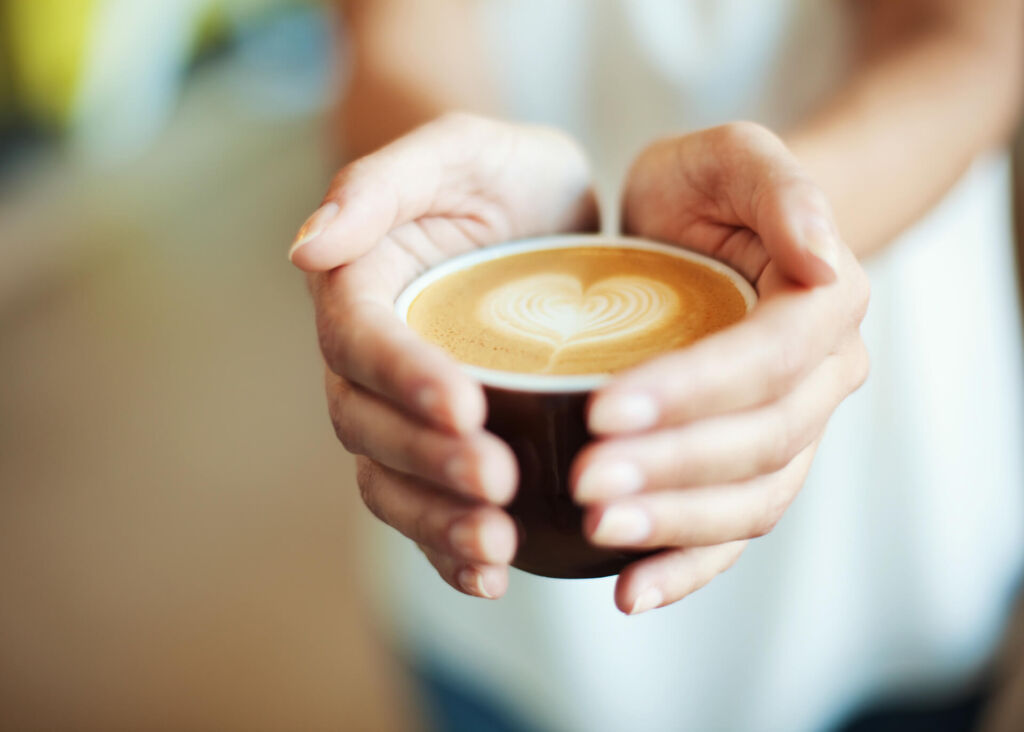 The half-and-half you use to prepare a breve makes it wonderfully smooth, tasty, and creamy. But the combo of cream and milk makes a breve rather heavy in calories.

The higher fat content (10% half-and-half vs. 3% milk) means that a breve has more than twice the calories and six times the fat than a latte. So you may want to stick to other drinks if you are on a low-calorie diet.

Using textured milk, a cafe latte has fewer calories and less fat, seemingly making it the healthier option. But lattes served at coffee shops often come with added sugar or syrups, which can even out the scales. 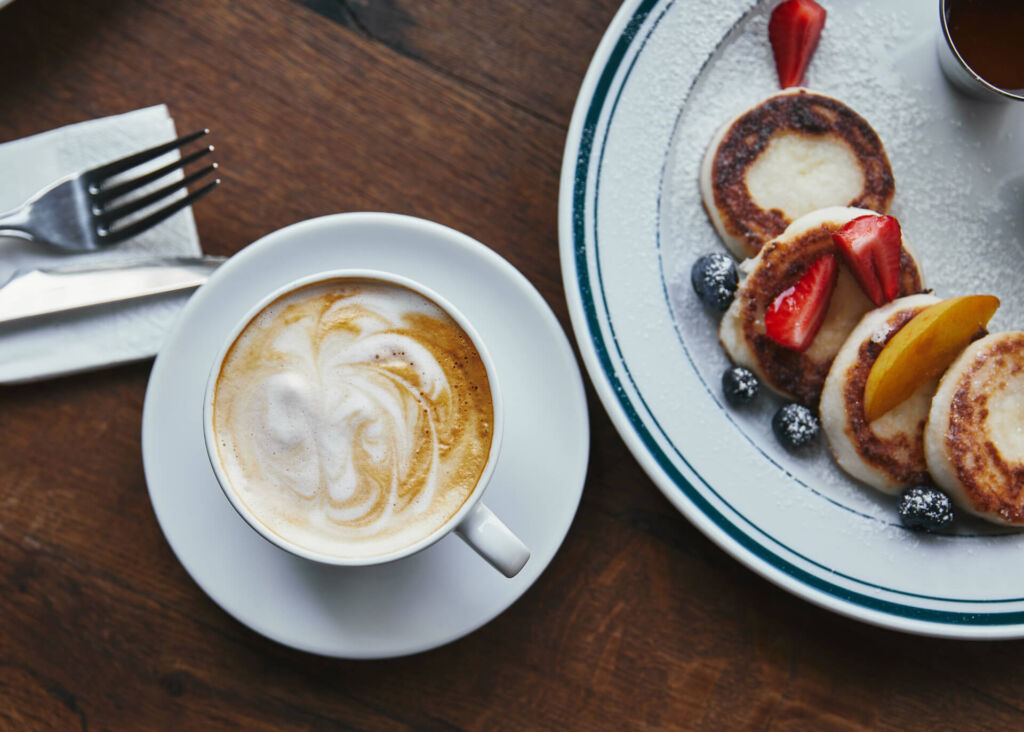 How to make caffè breve at home

If craving a breve strikes you, you don’t have to head to a coffee shop. Making a delicious breve at home is relatively simple and quick as far as espresso drinks go. Here are a few important things you should know when preparing a breve.

The espresso for a breve is made using espresso as a base. But not every home barista has access to a real espresso machine.

You can also use a Moka Pot or French press coffee maker to brew strong coffee. As long as the coffee is close to espresso strength, it will work, although you will not get espresso crema using alternative brewing methods. 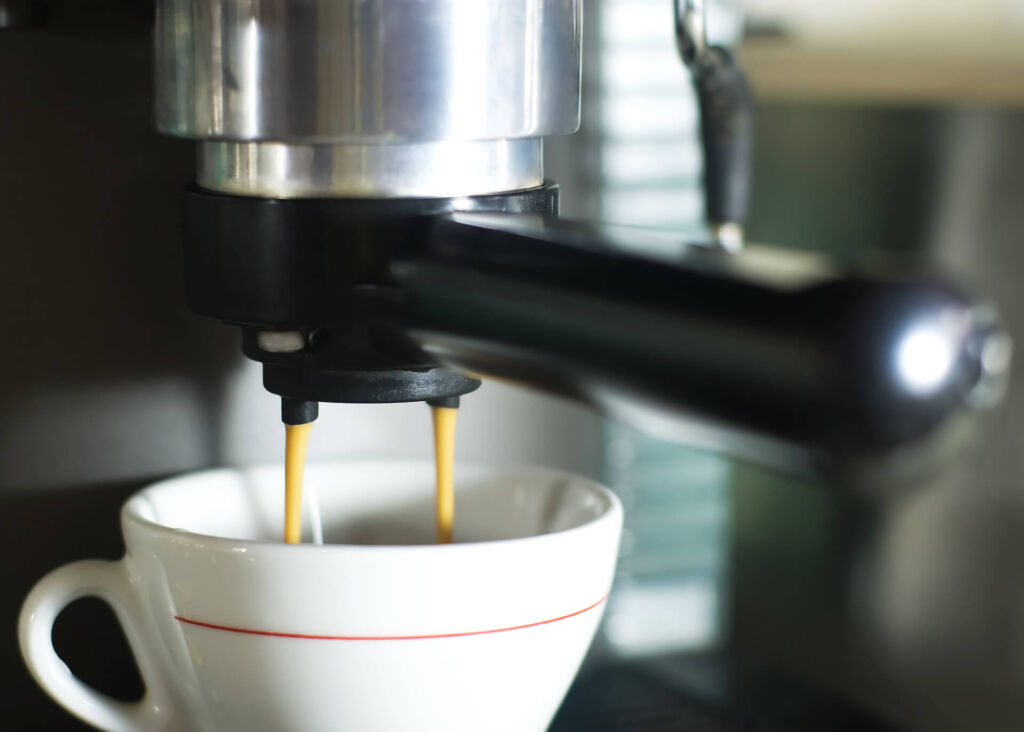 There’s no particular type of coffee beans that works best for breve. Of course, you’ll want a good espresso to serve as a base for your drink, but you can tweak it to your taste by carefully choosing your beans.

Use dark roasted Arabica beans for an ideal, intense espresso flavor and richness that will shine through that half-and-half.

Use medium roast coffee if you prefer less bitterness and fruity flavors. For those who want more caffeine in a breve, Robusta beans are an option. However, the coffee will not be as complex in terms of flavor as the one prepared with Arabica.

A traditional caffè breve is about 4 fluid ounces, which means you need one espresso shot. However, making a large breve with a double espresso is not unusual.

Whether you pull a single or a double shot of espresso, you can make a delicious breve as long as you remember the right ratio of espresso and half-and-half. In a caffé breve, espresso always makes up 1/4 of it.

Most people buy pre-mixed half-and-half. But did you know that you can also easily make it yourself in a few seconds?

For a basic half-and-half, mix one part of whole milk with an equal amount of cream. Making half-and-half yourself also allows you to control the amounts of calories and fat in it by using a different type of milk and cream.

Mixing light cream with regular milk will do the trick for a lighter version of half-and-half. Or if you want it extra rich and creamy, use less milk or add whipping cream. 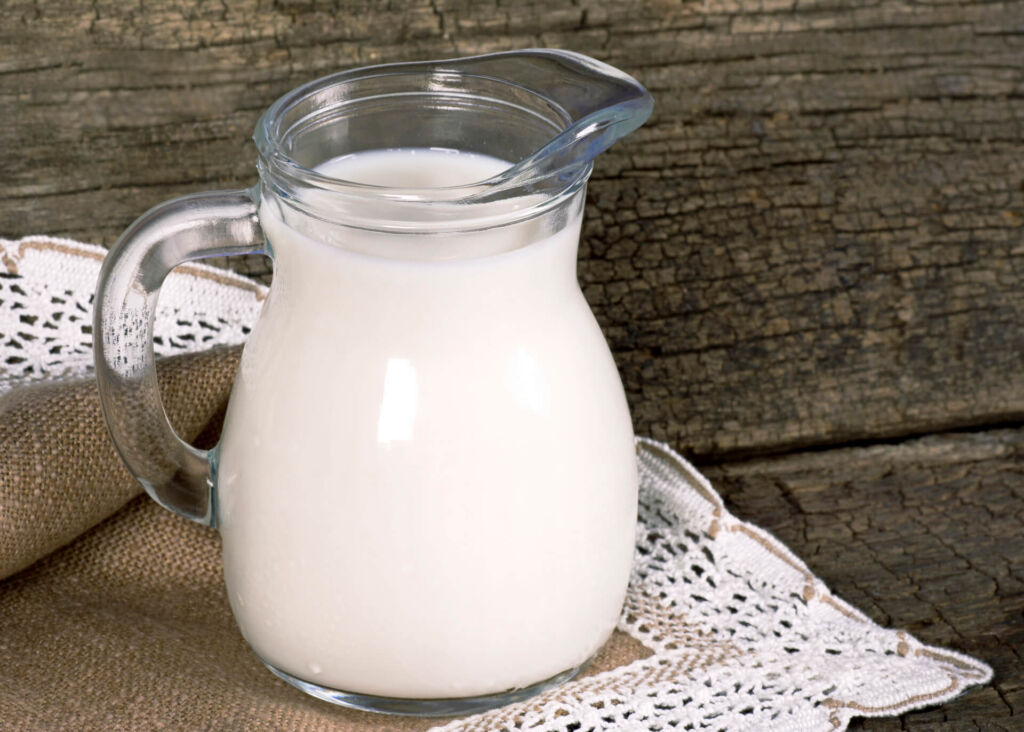 The half-and-half you use should be ice cold before you froth it. It will not foam correctly if it’s too warm. You can froth the half-and-half with a hand whisk, but a steam wand or a milk frother will give you creamier results.

A traditional breve is made with espresso and steamed half-and-half. The half-and-half adds some sweet creaminess, but the espresso flavor will still be strong.

You can dust the cup with cocoa powder if you prefer your coffee sweeter. Also, you can add syrup, whipped cream, or other coffee add-ins if you like. 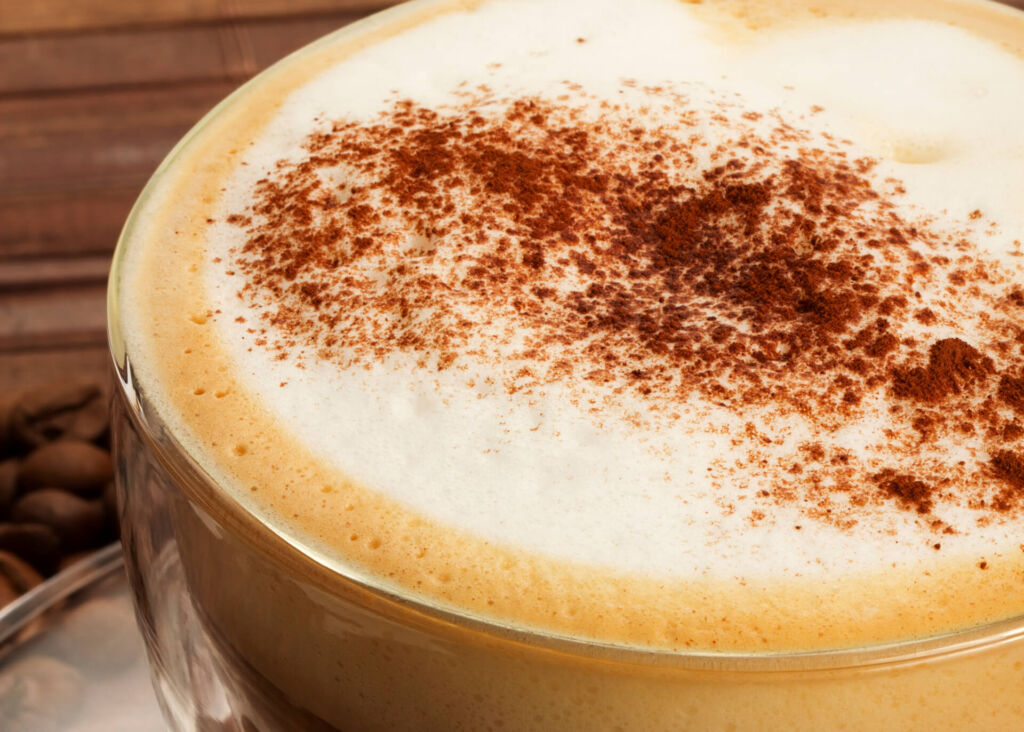 A perfect cup of breve gives you a wonderful coffee experience with its smooth texture and rich foam. And the best part is that you can brew your drink at home.

If you want to make a larger breve, simply double the ingredients of this recipe.

As an Amazon Associate and member of other affiliate programs, I earn from qualifying purchases.

So by now, hopefully, you have the answer to the question, “what is a cafe breve?” It’s a deliciously rich espresso drink made with whole milk and cream. Caffè breve is a creamier variant of a classic latte and a worthy member of the espresso drink family.

Whichever side you take in the debate of breve vs. latte, you should not miss out on the chance to taste a breve. You now know how to prepare a breve at home, so go ahead and give it a try!

Alana is a freelance writer by trade and a coffee enthusiast by passion. From San Francisco to London to Sydney, she traveled the world while discovering quirky cafes, making friends with baristas, and tasting excellent coffees.

Alana is a freelance writer by trade and a coffee enthusiast by passion. From San Francisco to London to Sydney, she traveled the world while discovering quirky cafes, making friends with baristas, and tasting excellent coffees.

This website uses cookies to improve your experience while you navigate through the website. Out of these, the cookies that are categorized as necessary are stored on your browser as they are essential for the working of basic functionalities of the website. We also use third-party cookies that help us analyze and understand how you use this website. These cookies will be stored in your browser only with your consent. You also have the option to opt-out of these cookies. But opting out of some of these cookies may affect your browsing experience.
Necessary Always Enabled
Necessary cookies are absolutely essential for the website to function properly. These cookies ensure basic functionalities and security features of the website, anonymously.
Functional
Functional cookies help to perform certain functionalities like sharing the content of the website on social media platforms, collect feedbacks, and other third-party features.
Performance
Performance cookies are used to understand and analyze the key performance indexes of the website which helps in delivering a better user experience for the visitors.
Analytics
Analytical cookies are used to understand how visitors interact with the website. These cookies help provide information on metrics the number of visitors, bounce rate, traffic source, etc.
Advertisement
Advertisement cookies are used to provide visitors with relevant ads and marketing campaigns. These cookies track visitors across websites and collect information to provide customized ads.
Others
Other uncategorized cookies are those that are being analyzed and have not been classified into a category as yet.
SAVE & ACCEPT
Skip to Recipe